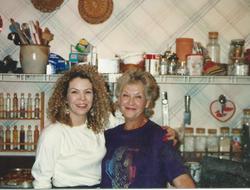 I had worked with crystals and stones for many years and knew a great deal about crystal energy but then something extraordinary happened when my mother transitioned in 2010. It changed everything for me! It awakened and opened me to the True Power of the Crystal Kingdom.  Here's my amazing story.

Eighteen months before my mother's death, my sister passed away. I was in Colorado a short time after her death. I was deeply grieving. I went into a gift shop, and there was someone making jewelry. I was attracted to a particular stone that was on her tray, and I asked about it. It was a turquoise. It was not a valuable specimen. It was just a green, blue and brown rock. I asked the shop keeper what were the metaphysical properties, and we looked it up in a book and found that it was for “peace and solace”. I knew that was why I was attracted to it. I had her put a bale on it and I started wearing that stone almost constantly.
A year and a half later, my mother who had many medical issues had a seizure and stroke. I went to Florida to be with her. I was wearing the turquoise. Tests revealed metastasized cancer in her lungs and brain. I was there when we told her that she was terminal and that any treatment would only cause suffering. It was very difficult and sad. Mom cried but not for very long. I saw the instant that she accepted her fate and she said, “I’ve seen people live a good long life and then the end is miserable. I don’t want that. I’m going to have a happy death.” She said the angels brought her back to say good-bye.

I was with her for 10 days. The time I spent with her was beautiful. She was very weak and needed assistance doing everything. But she was still conscious and aware. My mom wanted a happy death, and I was going to do everything I could to make it happy. I smiled, lay in bed with her, held her hand and talked about everything. Our talks were the most open and honest conversations I’ve ever had in my life. We laughed and cried and reminisced. We talked about life and death, angels and acceptance. But mostly we talked about love.

I left one week before she died. I would have stayed had I known. The doctors said she would live for months. Before I left, I asked her, “Do you think our souls can choose when our bodies die?” She replied, “I’m trying.” I told her she was a good mother and that I was honored and grateful to have been with her at this time. I told her that everything I know about love, I learned from her and that she taught me everything, including how to die with grace. I thanked her.   I put the turquoise stone that I had worn since my sister’s death on Mom’s bedside table. I told her how long I had worn it and explained that turquoise is said to give peace and solace in times of need. I said I hoped it would give her comfort.

When I returned home to NC, Mom’s health declined, rapidly. I wanted to return, but she said there was no need. She had one of my other sisters, my brother and my father with her. She wanted the house calm. I believe she didn’t want to have to wait for anyone to arrive.

I went into meditation when I got the call that Mom was passing. I went into my heart space, and I prayed harder than I ever did in my life. “Don’t let her suffer. Make it easy for her. Take her home.”  Then suddenly, it was as if I were in the room with her. I knew where everyone was in her room and what everyone was saying. I knew things that I shouldn't have known because I was sitting in North Carolina and they were in Florida. But I knew.  Because I was there!  And it is because of the turquoise.

The two nights before my mom died, I woke with severe pain in my back. It was unlike any pain I’ve ever felt before. Every time I moved, I moaned, so much so, that I woke my husband. We even considered going to a hospital. But then I realized that I was feeling some of my mother's suffering.  My mom passed on Sunday morning. Sunday night, the pain was gone.

Right after Mom died, I asked my sister to put my turquoise in a safe place.  She told me that the coroner had just given it to her. So I know that my mother was wearing it when she passed. My sister also said that Mom kissed the stone every night. I now know that I had unconsciously attuned to the turquoise by wearing it almost constantly and my mother put so much love into it that she attuned to it, too. I believe the stone linked us and that I experienced some of my mother’s pain. And I know our spirits were together in the end. It was the most profound and beautiful experience of my life.  It changed everything for me.  I believe that my mother's passing was part of a Divine Plan to awaken me and to reconnect me with the Crystal Kingdom. My faith and belief that we are spiritual beings had been renewed. I have learned, first hand, the unlimited power of the stones and that the stones can help to make miracles happen. 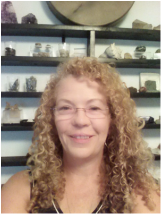 Learn more about, Nancy Petrozelli, the author and founder of the Crystal Attunement Academy here.